Building an innovation eco-system isn’t possible without sufficient venture capital. Working in tandem with financial and investment analysts, Sparkafire aggregated key data into compelling infographics, content and startup success stories for Annual Reports of the public and private venture capital invested in Central Ohio. The report served many critical needs: it rolled up into statewide reporting, helped generate local and national press about the region’s entrepreneurial eco-system and, most importantly, served to catalyze additional venture investments in the region. Venture capitalists are enticed to invest in regions that have launched and nurtured high-growth investable companies; they further like to invest where others have already invested. The Innovation Capital Reports helped demonstrate Central Ohio as a strong venture capital eco-system attracting venture investments from Boston to San Francisco. In fact, Central Ohio became home to Drive Capital, the largest VC firm between the coasts. The report further helped build and cement Central Ohio’s reputation as a technology and entrepreneurial hub.

Nurturing successful high-growth potential startups is at the heart of building an entrepreneurial eco-system. For the startups incubated at TechColumbus, Sparkafire provided a full complement of venture development services including marketing communications, media relations and competitive research. These efforts also involved showcasing the strengths of the TechColumbus incubator as a vibrant collective of people, ideas and businesses who worked independently and together to change the world. Many of these companies were involved in highly complex information technology and healthcare innovation. Sparkafire was charged with making these complex stories simple, relatable and impactful. 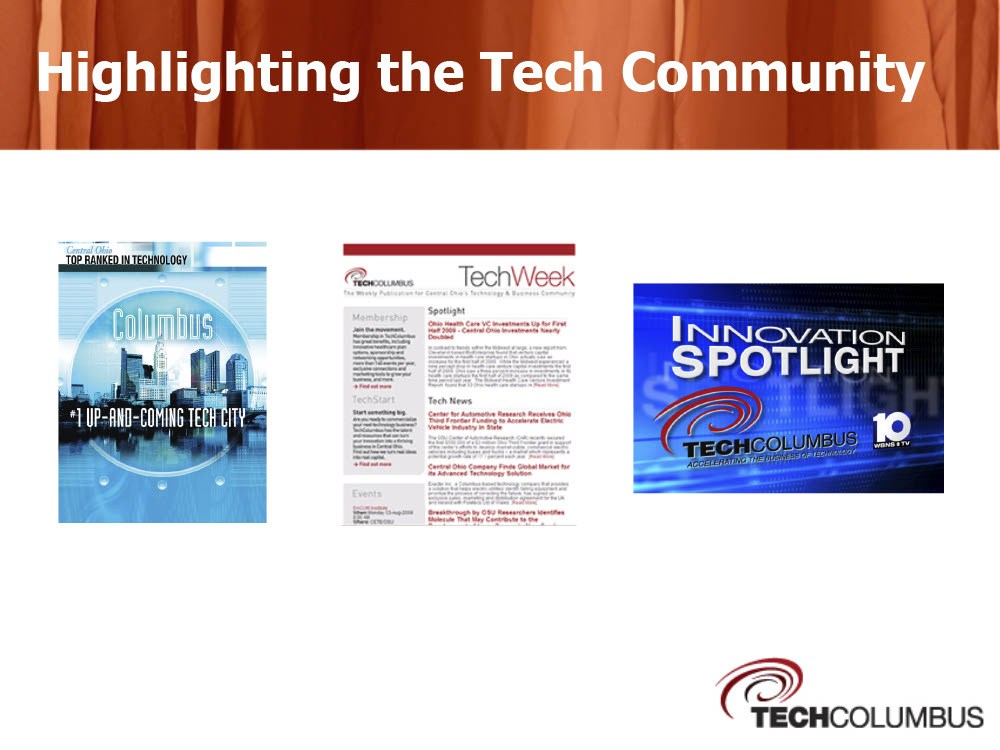 TechColumbus’ mission was three-fold: 1) invest in and incubate high-growth tech startups, 2) provide professional development for the region’s thriving IT community and 3) build the region’s reputation as a technology hub. A significant factor in creating this reputation was building awareness and congruity of messaging within the local community. A region doesn’t fully realize its reputational goals if only a few insiders are talking the talk. To that end, Sparkafire developed a number of public relations and content marketing strategies to gain internal recognition and amplification of the messages that Columbus was creating one of the nation’s fastest growing Tech Towns.
The most well-known of these initiatives was TechWeek, a weekly e-news digest of curated content from the region’s leading research, academic and business entities. TechWeek was an easy-to-use, easy-to-understand, easy-to-share update on the region’s latest innovation news. The publication, which was distributed weekly to a list of more than 10K subscribers, achieved many goals for TechColumbus. Numerous media stories were prompted from the journalists and broadcasters who subscribed to TechWeek. In a survey of TechColumbus members, TechWeek was cited as their number one avenue of engagement with the tech community and the organization. And although publication of TechWeek ceased more than five years ago, members of the community still remember it as a key source of innovation news.

TechWeek and a number of other engagement vehicles were critical in building and sustaining Central Ohio’s reputation and success as a technology and innovation center.